I can, however, judge her reviews of books and movies, and if her 2012 video about The Hunger Games is any indication, her commentary runs the gamut from the banal to the laughably wrong.

Oh, and before you go on, there be spoilers here for The Hunger Games, Catching Fire, and Mockingjay. Proceed at your own risk.

Here, I should add that I think The Hunger Games is not only an excellent series, but one of the best works of fiction in recent years in its approach to gender. (Yeah, Suzanne Collins’s writing style is a bit flat, but I actually think it works well for this kind of novel.) In Katniss Everdeen, it gives us a three-dimensional, active female protagonist whose struggles don’t have anything to do with gender. I love that Katniss is trying to protect Peeta as much (or more, actually!) as he is trying to protect her. (I could have done without the love triangle and frankly I think Gale is one of the books’ least interesting characters, but hey, nothing is perfect.) I love that while Katniss is a fighter, she’s not somehow magically stronger than all the guys. I love that it’s never at any point suggested that there is something uniquely horrible about forcing girls as well as boys to fight to the death; the Hunger Games are horrible, but female victims are never treated as more worthy of sympathy or horror than male ones.  I love that there’s no bullshit about the Panem power structure being oppressive because it’s “male.” I love that the rebels are led by a woman, Anna Coin, and that she turns out to be just as bad as the people she’s fighting. (Which, gender aside, is also a commentary on many revolutions.)

Okay, first of all, unrelated to gender: at about 55 seconds in, Sarkeesian makes a passing comment about how the premise of the book is unrealistic because there’s no way people would give up randomly selected kids to participate in a fight-to-the-death spectacle without a fight.

Has she actually read the damn books? Because I think it makes perfect sense in the context of the Hunger Games universe. The people from the districts are too cowed to rebel. Plus, the Hunger Games system is actually a combination of carrot and stick — well, lots of stick and a little carrot. If you win, you become a celebrity and a hero, and not only your family but your town reaps major economic benefits.

Then, there’s a discussion of Katniss that consists of a lot of statements of the obvious. She’s not reduced to her gender, she’s not sexualized or objectified, she shows sympathy and compassion for her family and friends. One of Sarkeesian’s pet ideas is that a truly feminist heroine has to challenge the “patriarchal value system” not only with regard to gender roles but also by prioritizing compassion, cooperation, and non-violent conflict resolution over competition, dominance, vengeance, and so on. So, for instance, she refuses to consider Mattie Ross in True Grit a feminist heroine, because among other things she doesn’t show enough emotion and doesn’t question the idea that death is appropriate retribution for her dad’s murderer.  I have to say that I find this idea deeply offensive. If a conservative wrote that a female character was a bad model of womanhood because she’s insufficiently emotional and too vengeful, he (or she) would rightly be excoriated as a sexist. So why is it okay for Sarkeesian to declare a female character to be a bad model of feminism because she’s too much “like a man”? I have no words for how obnoxious that is. Well, I do, but they’re the kind of words that would violate my own rules about civility in public discourse.

Katniss mostly meets Sarkeesian’s True Feminist test (whew!). Except that Sarkeesian manages to give her a passing grade by seriously misrepresenting the books. For instance, she asserts (at 3:56) that Katniss remains “troubled and disturbed at the idea of personally murdering another human being, even within the context of the death match.” Reeeally? Re-read the start of Chapter 18 of The Hunger Games, where Katniss kills the boy who has just mortally wounded her friend and ally, Rue.

The boy from District 1 dies before he can pull out the spear. My arrow drives deeply into the center of his neck. He falls to his knees and halves the brief remainder of his life by yanking out the arrow and drowning in his own blood. I’m reloaded, shifting my aim from side to side, while I shout at Rue, “Are there more? Are there more?”

Earlier, at the end of Chapter 11, Katniss is rather cold-bloodedly contemplating the murder of the girl who is camping out near her hiding place at night and is stupid enough to light a fire, which is likely to be spotted by the “career” tributes:

I lie smoldering in my bag for the next couple of hours, really thinking that if I can get out of this tree, I won’t have the least problem taking out my new neighbor. My instinct has been to flee, not fight. But obviously this person’s a hazard. Stupid people are dangerous.

(The careers get there first and kill the girl without spotting Katniss.)

In fact, at 5:55, Sarkeesian contradicts herself by noting (when discussing the ways in which Katniss is shown as traumatized by violence) that near the end, she aims an arrow at Peeta’s heart when she thinks he’s about to kill her.

And then there’s this: 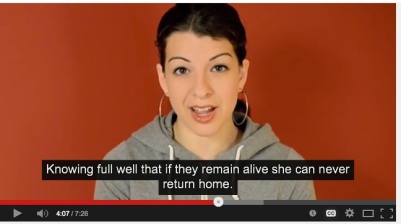 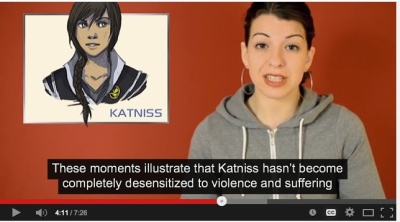 This is the same Katniss who counts the dead tributes at the end of each day, with no thought other than “The more of them die the more chance I have of staying alive”?  The only death (other than Rue’s) at which she feels sorrow is that of Thresh, because he cared about Rue and because he saved her (Kat’s) own life earlier, and then spared her:

Thresh dead. I should be happy, right? One less tribute to face. And a powerful one, too. But I’m not happy. All I can think about is Thresh letting me go, letting me run because of Rue, who died with that spear in her stomach…

And that’s just in the first book. By the third, Katniss actually demands, as a condition of cooperating with the rebels, the right to personally kill President Snow. And I know Sarkeesian had read all three books by the time she made her video, because one of her criticisms was that the love triangle took up too much room in the later books. (One of the few points on which I agree with her, but that’s hardly an insight of stunning originality; almost everyone I know thinks the love triangle was pointless and boring.)

The inconsistency is, apparently, that Katniss is very distraught by Rue’s death, but “doesn’t even bat an eye” at that of “Foxface,” the girl who dies after stealing berries from Katniss and Peeta’s food supply that turn out to be poisonous: 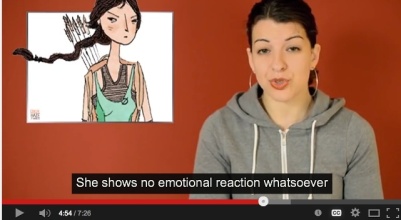 Are you kidding me?

First of all, while Foxface has cleverly stayed out of the action, she was hurting or trying to hurt Katniss and Peeta by stealing their food supplies.

Secondly, Katniss also remains unfazed by the deaths of several other tributes who haven’t hurt anyone. At first, I was going to say that Sarkeesian’s objection to Katniss’s lack of grief at Foxface’s death betrays her sexism, since Katniss also shows no grief at the murder of several harmless males (like the boy in Chapter 11 with whom she struggles for a backpack at the Cornucopia and who is killed right in front of her — she’s only repulsed by being splattered with his blood), but after re-reading the scene where the girl who lights the fire is killed, I had to conclude that Sarkeesian is not being sexist; she’s just being stupid.

The rest of the seven-and-a-half-minute video is taken up by a discussion of how male heroes are typically portrayed as suffering no emotional repercussions from violence and how refreshing it is that Katniss struggles with such repercussions. But ironically, in trying to squeeze Katniss into her politically correct little box of Compassionate Feminist Hero, Sarkeesian totally dilutes one of the strongest themes of the trilogy: that being forced into a world of brutal violence does have a dehumanizing effect.

Is there a place for intelligent media criticism that focuses on gender issues? Sure thing. But the fact that Sarkeesian has emerged as the leading voice in such criticism right now ensures that it’s going to be propaganda, not analysis.

(P.S. I’m leaving the comments open, but any comments containing personal abuse of any kind will not be approved.)

THIS IS RAPE CULTURE! … not?

Maybe it’s time for me to take back everything I’ve ever said about “the rape culture.”

Like, how it’s slightly deranged to suggest that any modern liberal society has one.

Because, really, what else do you call it when a man can post reams of pornographic fantasies online about a female celebrity, and not only get away with it but get a six-figure book deal to turn those fantasies into a novel?

Correction: When a woman can post reams of pornographic fantasies about a male celebrity and get a six-figure book deal.

Can you imagine the howling in the feminist blogosphere and on Twitter if the genders were reversed?

Anyway. Still no rape culture, sorry. But considering that this is One Direction fanfic we’re talking about, it does make me weep for the future of culture, period.

My new column discusses the J.D. Salinger lawsuit to stop the publication of a book called 60 Years Later: Coming Through the Rye that is kinda, sorta a sequel to Catcher in the Rye.

My argument: copyright law as it currently exists does the opposite of its original intent (as formulated in the U.S. Constitution, which allows Congress to legislate on copyright, and in the very first copyright statute enacted in 1790): to promote arts and letters and encourage learning, by giving authors an incentive to create new works by ensuring that they can fairly profit from their writings.  (In olden days, it wasn’t at all uncommon for unauthorized editions of books to be legally sold with no profits going to the writer.)  Today, copyright violation claims are commonly invoked to suppress new works — wheter it’s 60 Years Later, The Wind Done Gone (the “Gone With the Wind-from-a-slave’s-point-of-view” novel that was finally declared legal after much wrangling in the courts), a production of a James Joyce play, or fan-made Xena: Warrior Princess videos on YouTube.

Stanford law professor Lawrence Lessig has argued that unless copyright law is reformed, it will end up stifling the creativity of a generation, particularly in the age of digital art. At the very least, the law should focus more on whether the copyright holder suffers actual economic loss, or be denied rightful gain, because of the infringement. As for restricting the use of one’s character or story by other artists of writers, it seems fair that, like the right to sue for libel, this right should be terminated by death. (Personally, I would support a term of 50 years, with a portion of revenues from any derivative work published thereafter going to the original author.)

Actually, I should have been clearer: 50 years or the death of the author, whichever comes first.

While ego-surfing Google Blogs tonight, I spotted my name on the LewRockwell.com blog, in reference to the column and my “50-year copyright term” proposal.  I just knew I — and Reason — were getting slammed, so I figured it was for disrespect for intellectual property rights unbecoming libertarians.  Well, I was wrong.

END_OF_DOCUMENT_TOKEN_TO_BE_REPLACED

Filed under books, culture, freedom of the press, intellectual property