Is Chas Freeman, who has withdrawn his nomination to chair the National Intelligence Council, a victim of “the Israel Lobby”?

I find Freeman’s views on the Israeli-Palestinian conflict, as summed up in the “money quote” in this post from Andrew, to be quite lacking in the “balance” that many argue the U.S. needs in its approach.  This isn’t balance so much as one-sided Israel-blaming, for everything including the failure to “gain [the] admiration and affection” of any of its neighbors.  (How many of them were prepared to extend it?)  That aside, though, there really are other reasons to not want Freeman in a high-level foreign policy position.  Jonathan Chait gives examples of people who have nothing to do with the Israeli lobby who have opposed the appointment because of Freeman’s very cavalier attitude toward human rights, particularly his record as an apologist for the Chinese regime.  For more analysis, see this great post by Ron Radosh.  No, Freeman’s comments were not taken out of context, and Ron demonstrates that in his defense of the Tiananmen Square crackdown (or rather, his criticism of that crackdown for not being resolute enough), Freeman also defends brutal actions against peaceful protesters right here in the U.S. in 1932. END_OF_DOCUMENT_TOKEN_TO_BE_REPLACED

[T]here is no question that the Obama budget contemplates a growth of the federal government relative to both the states and civil society. This is what happened under FDR, driving the conservatives of the time to paroxysms of rage. Today’s conservatives are doing what Ronald Reagan never did–namely, relitigating the merits of the New Deal. It’s not clear whether Brooks intends to join them. If so, he should either argue explicitly that the New Deal was a mistake, or distinguish between today’s needs and those of the 1930s. If not, it’s hard to see the prima facie case against Obama’s course.

Well, leaving aside the merits of the New Deal, there is one major difference.  In 1940, total federal, state and local spending in the United States equalled about 19% of the GDP (up from 13% in 1930).  Today, it’s close to 37%.  (The data can be found here.)  Growing government from a small base is — to point out the obvious — not the same as growing it from a large base.  A Rooseveltian expansion of government today would push its size to some 56% of the GDP.

Meanwhile, on Salon.com, Michael Lind castigates Obama for not being pro-big-government enough and for espousing market-oriented “neoliberalism,” a liberal adaptation to the tyranny of conservative free-market fundamentalists.  (Back in June, Lind wrote that conservatism had already been defeated.  Never mind.)   He dislikes the cap-and-trade approach to pollution, preferring command-and-control.  He is angry that Obama wants to encourage private initiative and investment to develop “green” energy, instead of organizing a government research program civilar to the one FDR created to develop the atomic bomb.  (If Lind cannot see the difference between a weapons program with a very specific goal and the development of alternative energy sources in a vast and complex economy, trying to explain is hopeless.)  He hails FDR as the model of centralized action that Obama is failling to emulate, since FDR “imposed a single, simple, efficient tax to pay for a single, simple, efficient public system of retirement benefits.”   You’d think it was only “free-market fundamentalists” who have warned about the problems an aging population creates for Social Security.

By the way, here, Lind says that “socialism” is a racial code word in the same manner as “welfare queen.”  But of course; that’s why there’s all this talk of “European” or “Swedish” socialism.  Because when Americans think “Sweden,” they think “lazy shiftless blacks.”  Makes perfect sense.  Does anyone take Lind seriously?

And here on Slate.com, Jacob Weisberg explains why Obama is not a European-style social democrat and why “European socialism” wouldn’t work here even if Obama endorsed it.  He makes an interesting case.

(Yes, another tired pun on the word “rush.”)

What do I think on the great debate about Rush Limbaugh and the GOP?  I don’t think there’s any way in which it can be good for the Republican Party to be seen as in thrall to The Mouth That Roared, any more than it would be good for the Democrats to be seen as in thrall to their big fat idiot.  (I will say that I don’t think the DNC chairman wouldn’t call Michael Moore’s rhetoric “incendiary” and “ugly” for fear of alienating his fan base, but I also doubt that Moore would be the star speaker at a gathering of liberal activists.)

Jonah Goldberg defends El Rushbo here.  Among other things, Jonah asks why it’s wrong for Rush or any other conservative to say that he or she wants Obama to fail, considering that Obama’s agenda — to “remake America as a European welfare state” — is one that conservatives naturally oppose.  But there are many ways to say the same thing.  I, for instance, would say that I hope Obama succeeds in turning the economy around, but fails in foisting upon us the big-government programs he is seeking to enact.   Surely, Rush Limbaugh is smart enough to figure out something like this.

Besides, since when did hoping for the failure of ideological agendas you disagree with become unpatriotic? Liberals were hardly treasonous when they hoped for the failure of George W. Bush’s Social Security privatization scheme.

No, but they were certainly called unpatriotic or downright treasonous — and rightly so — if they hoped for the failure of American troops in Iraq.  Maybe war is different; but hoping for bad news in the midst of a major economic crisis does not seem much more attractive than hoping for bad news in the midst of a war.  I would also add that if the Social Security reform did go through, any liberal who stood up and said that he or she hoped it would end in disaster and bankrupt millions of seniors would quickly become public enemy No. 1 to Rush and others — Exhibit A in the case against America-hating liberals.

Obviously, I don’t particularly care for Rush.  I don’t listen to him a whole lot.  I know that, unlike some of the talk radio screamers, he doesn’t insult and berate callers who disagree with him.  I know that, compared to Michael Savage, his show is an oasis of civility, and that in some cases he has readily apologized for using ugly language.  I do, however, know that Rush’s stock in trade is demonizing the opposition and treating Americans with different politics as the enemy.  That, as far as I’m concerned, makes him part of the problem.  Jonah mocks Tom Daschle for complaining about Rush’s broadsides in 2002, but those broadsides really were pretty extreme; Limbaugh basically accused Daschle of treason for criticizing the Bush administration’s conduct of the war and called him “Hanoi Tom” and “Tokyo Tom.”

I do wholeheartedly agree with Jonah’s proposal to bring back Firing Line — the old show hosted by William F. Buckley that featured rational, civil, interesting conservative-vs.-liberal debate.  An online version of Firing Line would be good as well.  I’d participate.

The S-word and the F-word 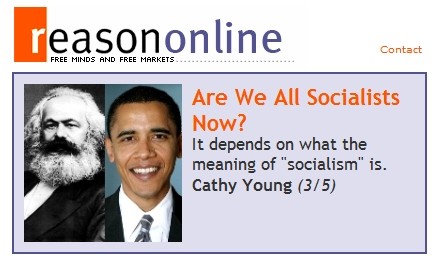 My column on the brouhaha about Obama as a “socialist” appears on RealClearPolitics.com (and on Reason.com) this week.   Short answer: Yes, Obama’s proposals advance and enhance the welfare state and government involvement in the economy (and yes, I think this is a bad thing); no, this is not any sort of radical departure from the existing system (as my Reason colleague Veronique de Rugy has noted, Obama’s budget “simply expands the Bush policies of bigger government and increased centralization”); and to compare this to Communism by invoking, as Mike Huckabee and others have done, the decrepit ghosts of Lenin and Stalin verges on obscenity.

Now, we have a debate between my friend Ron Radosh and The New Yorker‘s Hendrik Hertzberg on whether Obama’s policies are leading us toward “fascism American style.”    END_OF_DOCUMENT_TOKEN_TO_BE_REPLACED

Apparently, this week is official Israel Apartheid Week on 40 campuses around the world — a movement that started a few years ago in Toronto.  While schools in Canada have removed some offensive posters associated with the event (a cartoon of a hook-nosed Hasidic Jew with a bazooka, another showing an Israeli plane with a swastika), the concept itself is ugly.  One need not agree with all Israeli actions to find this outrageous, particularly considering the multitude of brutal regimes that are not singled out for protest.  I rarely join in Internet petitions, but this one, urging Canadian college administrators to “marginalize such hateful dialogue,” is worth signing.  (Via Ted Belman’s Israpundit site, and one needn’t agree with everything on that site to support this particular initiative, either.)

Update: Ampersand points out in the comments that the posters in question were associated with a different anti-Israel event in January.  I regret the error.